Military and methods of warfare 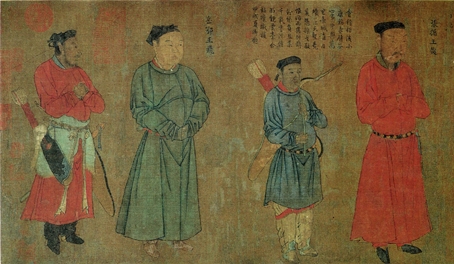 The Song military was chiefly organized to ensure that the army could not threaten Imperial control, often at the expense of effectiveness in war. Northern Song's Military Council operated under a Chancellor, who had no control over the imperial army. The imperial army was divided among three marshals, each independently responsible to the Emperor. Since the Emperor rarely led campaigns personally, Song forces lacked unity of command. The imperial court often believed that successful generals endangered royal authority, and relieved or even executed them (notably Li Gang, Yue Fei, and Han Shizhong.)

Although the scholar-officials viewed military soldiers as lower members in the hierarchic social order, a person could gain status and prestige in society by becoming a high ranking military officer with a record of victorious battles. At its height, the Song military had one million soldiers divided into platoons of 50 troops, companies made of two platoons, and one battalion composed of 500 soldiers. Crossbowmen were separated from the regular infantry and placed in their own units as they were prized combatants, providing effective missile fire against cavalry charges. The government was eager to sponsor new crossbow designs that could shoot at longer ranges, while crossbowmen were also valuable when employed as long-range snipers. Song cavalry employed a slew of different weapons, including halberds, swords, bows, spears, and 'fire lances' that discharged a gunpowder blast of flame and shrapnel.

Military strategy and military training were treated as science that could be studied and perfected; soldiers were tested in their skills of using weaponry and in their athletic ability. The troops were trained to follow signal standards to advance at the waving of banners and to halt at the sound of bells and drums.

The Song navy was of great importance during the consolidation of the empire in the 10th century; during the war against the Southern Tang state the Song navy employed tactics such as defending large floating pontoon bridges across the Yangzi River in order to secure movements of troops and supplies. There were large naval ships in the Song that could carry 1,000 soldiers aboard their decks, while the swift-moving paddle-wheel crafts were viewed as essential fighting ships in any successful naval battle.

There was a total of 347 military treatises written during the Song period, as listed by the history text of the Song Shi (compiled in 1345). However, only a handful of these military treatises have survived, which includes the Wujing Zongyao written in 1044. It was the first known book to have listed formulas for gunpowder; it gave appropriate formulas for use in several different kinds of gunpowder bombs. It also provided detailed description and illustrations of double-piston pump flamethrowers, as well as instructions for the maintenance and repair of the components and equipment used in the device.